Tourality uses a similar set of principles to Geocaching in that the user can follow the GPS system installed within their smart form to get from one predefined point to another. On the tourality application you are given a specific location either in an urban populace or completely out in the country side and your target is to get there as quickly as possible before you move on to the next location. Essentially it gets the user to go out and explore their surroundings in a way they wouldn’t necessarily have used before.

Tourality differs to geocaching purely down to the timed and score keeping qualities. Users are given a score based on the time it takes them to get to one point from another and they can then compare this score against friends and other people within the tourality community. However, unfairly in my opinion it doesn’t take into account the method of transport users take to get to the reference points. So somebody with a highscore within the system may drive everywhere as opposed to somebody who walks. I think the company should encourage walking as it is both healthier for the environment and the users way of life. The timed aspect adds a lot of competition which some may find intimidating whilst others may take as more of an engaging and encouraging quality to stay on and constantly try to beat their previous times or times set by their friends.

Of course getting from A to B isn’t all that tourality is about. Goodie spots are located within the game which can conceal a multitude of items. More commonly these spots will contain gold which can be spent inside the game on gadgets to give the user an advantage, but sometimes they will even conceal thieves who will take gold and gadgets off of the user! In keeping with the importance of the game being entirely time based, these goodie spots are only available to see on the map for a short span of time so that the users have to be quick to get there before they disappear completely.

The gadgets which the gold can be spent on are interesting quirks to mix the game and give advantage to the user who has collected the most. The gadgets come in a few different forms but some examples are ‘The Jumper’ which allows the user to be beamed to the next spot, there is a ‘Blinder’ which blinds the adversaries against the user and their team which will give them more of an opportunity to get to the next position first or there can even be the opportunity to buy a hint from somebody within the game who can tell you where stolen gold may be hidden so you can go back and buy even more gadgets. 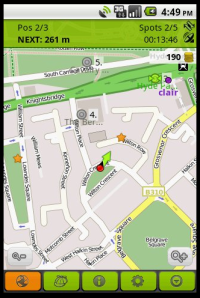 The interface for the application looks like it’s been taken and reworked on top of google maps. Competitors and team mates are shown via the GPS satellite so their progress can be monitored whilst the gold stars show where the goodie spots are. With so many objectives i wonder if it’s confusing to the user to understand what is more important. Collecting gold or getting to the destination first? Along the top portion of the screen the distance to go and time already taken is logged so the users can closely monitor how they’re doing in terms of keeping/earning a high score.

This GPS system, and ability to monitor people in the same or opposing teams, is similar to online multiplayer games such as Call of Duty.